Step inside the zany world of The Castanet Club

It's been almost four decades since The Castanet Club made their debut on stage at the rear of the Clarendon Hotel in the early 1980s. What began as a group of local Newcastle friends performing tongue-in-cheek comedy, theatre, music and dance soon turned legendary on the Australian cabaret circuit achieving national and international acclaim.

For the first time since 1991 the iconic gang are back together for a gig of a different kind – as the stars of a new exhibition at Newcastle Museum! 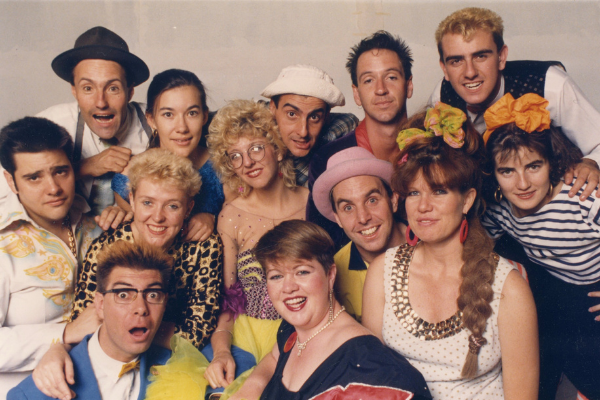 The Castanet Club: an exhibition you can dance to! is a one of a kind experience you don't want to miss...and luckily for us Newcastle Museum have created a video series called Almost Live from The Castanet Club so we can enjoy the exhibition from home while the Museum is closed during lockdown.

In episode 1 The Medley Sisters join us from the late 1980s and get into a banjo duel - except with a violin and an accordion. Maynard makes a special Castanet Club themed cocktail with scientist Catherine and bartender Harry (they also chat about sedimentary rocks). We round off this electric experiment in almost live entertainment with The Lairs, who take us all the way to Las Vegas!

In episode 2 Maynard goes on a deep dive into the complex history of and uses for bunting with Newcastle Museum's head bunter Emma, Lance Norton overcomes a shambolic start to a Tom Jones classic at the Sydney Trade Union Club in 1984, and we finish off with high operatic drama from the Nutbush Seating Limits singing The Legend of Xanadu!

In episode 3 local legends Fish Fry get us off to a roaring start with 24 Hours from Tulsa. Maynard and Zorica demonstrate Rodney Cambridge MBE’s Lamington Recipe (concluding it’s easier to go to the bakery). Finally, Nastassja Bassi haunts us from 1986 with a beautiful version of Wuthering Heights.

We also caught up with Newcastle Museum Curator David Hampton earlier this year to get the scoop on what you can expect when you step inside the colourful world of The Castanets.

What inspired you to create this exhibition?

In 2016 The Castanet Club's former manager Jodi came to us with an offer to donate the vast archive of material she had kept from her time working with the band. It turned out to be a treasure trove of art, merchandise, and rare copies of original performances. We've been working on the collection for several years now, waiting for the right time to use it to create an exhibition celebrating the colourful, wacky world of the Castanets.

The exhibition is presented using a variety of formats - band posters, photographs, scripts, records, VHS and cassette tapes. Can you tell us more about the design of the exhibition and how it came about?

Just like palaeontologists rebuild dinosaurs from fossils, we've had to reimagine The Castanet Club based on a combination of modern fossils like video tapes and old posters. We wanted to recreate the experience, because that’s what people that were there kept telling us – you had to experience The Castanet Club. To do this, we have called on so many talented people, from our own exhibition staff to the City of Newcastle carpenters, painters and signwriters, and I think most notably, celebrated artists and local living treasure Michael Bell. Michael worked with The Castanet Club originally and helped set the tone and look of the club. He's produced an absolutely beautiful recreation of the original sign, a stage, and generally given the space its Liquorice Allsorts looks. 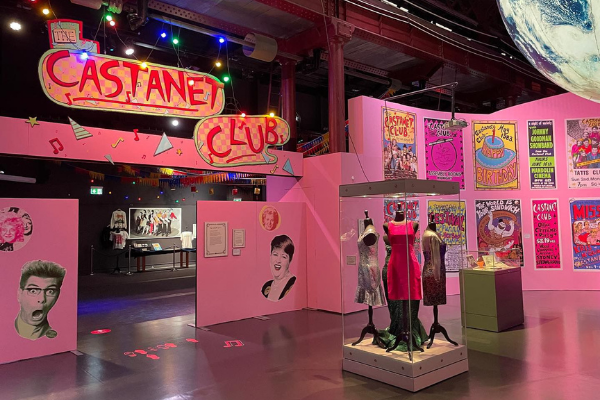 What can visitors expect from the exhibition – why should they visit?

Expect music, loud costumes, good singing, bad singing, bizarre humour, and a huge amount of pink. We've painted everything pink and it looks glorious. I think people should visit just to see Mikey Robins play the recorder through his nose, but look that’s probably just me.

Can you tell us about some of your favourite pieces from the exhibition, and why?

I really enjoy the share house living room we have built into the space - as a former Cooks Hill share house resident I really relate to the slightly dingy terrace house aesthetic we've managed to capture. We've even got a 1970s TV playing rare footage of the Castanets Round the World bus trip. I'm also a big fan of the costumes, they are a lovely connection to the original performers and the characters they inhabited.

I would like to thank all the Castanets for trusting us with their objects and stories, and allowing us to share them with the Newcastle community. It’s a pleasure to have found myself working with the dags who do good!

The Castanet Club: an exhibition you can dance to! is on display at Newcastle Museum until the end of October, pending restrictions.

By day or by night, here are a few ways to enjoy the Civic precinct
Art & culture

Discover the art of the Torres Strait